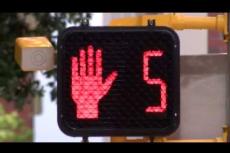 UL Lafayette's goal is to provide a safe environment on campus for everyone. 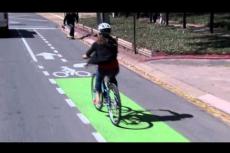 It's important as bicyclists, drivers, and pedestrians to be alert at all times and understand the rules of the road.

View a diagram of the St. Mary bike lane.

Cyclists must travel in the same direction as motor vehicle traffic. Cyclists are instructed not to ride against traffic.

Because of right-turning vehicle and bicycle conflicts, combined turn lanes will be shared by bicycles and right-turning motor vehicles. Combination bike/motor vehicle turn lanes will be located at Rex St., Hebrard Blvd., Girard Park Circle and McKinley St. Bicycles going straight in the bike lane and right turning vehicles must line up within space provided in the combination lane.

Bicycles intending to turn right should shift toward the center of the right turning lane and get in line with motor vehicles turning right. Green pavement markings indicate the conflict zone which means there is a potential for motor vehicles and bicycles to conflict with each other. In the green conflict zones, motor vehicles must yield to bicycles. Bicyclists wishing to make a left turn off of St. Mary onto side streets are encouraged to exit the bike path and then walk their bicycles across the street using a designated crosswalk.

Download a PDF for a full view of St. Mary.

Where roadway width is limited, sharing the lane and/or passing cyclists is not allowed. Cyclists may use the full lane of traffic and motorists must fall in line behind or in front of bicycles where they enter the motor vehicle travel lane from the bike lane.

The bike lane will also transition to shared roadway immediately prior to the project boundaries—just before Taft/ Girard Park Drive (southbound) and St. Landry (northbound).